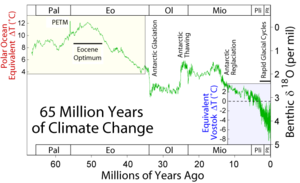 Expansion showing climate change during the last 65 million years. Note that the scales are not numerically the same since they are based on measurement different types of taxa under different conditions.

This figure shows the long-term evolution of oxygen isotope ratios during the Phanerozoic eon as measured in fossils, reported by Veizer et al. (1999), and updated online in 2004.[1] Such ratios reflect both the local temperature at the site of deposition and global changes associated with the extent of permanent continental glaciation. As such, relative changes in oxygen isotope ratios can be interpreted as rough changes in climate. Quantitative conversion between these data and direct temperature changes is a complicated process subject to many systematic uncertainties, however it is estimated that each 1 part per thousand change in δ18O represents roughly a 1.5-2 °C change in tropical sea surface temperatures (Veizer et al. 2000).

Also shown on this figure are blue bars showing periods when geological criteria (Frakes et al. 1992) indicate cold temperatures and glaciation as reported by Veizer et al. (2000). The Jurassic-Cretaceous period, plotted as a lighter blue bar, was interpreted as a "cool" period on geological grounds, but the configuration of continents at that time appears to have prevented the formation of large scale ice sheets.

All data presented here have been adjusted to 2004 ICS geologic timescale.[2] The "short-term average" was constructed by applying a σ = 3 Myr Gaussian weighted moving average to the original 16,692 reported measurements. The gray bar is the associated 95% statistical uncertainty in the moving average. The "long-term average" is a σ = 15 Myr Gaussian average of the short-term record (see notes).

On geologic time scales, the largest shift in oxygen isotope ratios is due to the slow radiogenic evolution of the mantle. A variety of proposals exist for dealing with this, and are subject to a variety of systematic biases, but the most common approach is simply to suppress long-term trends in the record. This approach was applied in this case by subtracting a quadratic polynomial fit to the short-term averages. As a result, it is not possible to draw any conclusion about very long-term (>200 Myr) changes in temperatures from this data alone. However, it is usually believed that temperatures during the present cold period and during the Cretaceous thermal maximum are not greatly different from cold and hot periods during most of the rest the Phanerozoic. However, recently this has been disputed by Royer et al. (2004), who suggest that the highs and lows in the early part of the Phanerozoic were both significantly warmer than their recent counterparts.

Common symbols for geologic periods are plotted at the top and bottom of the figure for reference.

The long-term changes in isotope ratios have been interpreted as a ~140 Myr quasi-periodicity in global climate (Veizer et al. 2000) and some authors (Shaviv and Veizer 2003) have interpreted this periodicity as being driven by the solar system's motions about the galaxy. Encounters with galactic spiral arms can plausibly lead to a factor of 3 increase in cosmic ray flux. Since cosmic rays are the primary source of ionization in the troposphere, these events can plausibly impact global climate. A major limitation of this theory is that existing measurements can only poorly constrain the timing of encounters with the spiral arms.

The more traditional view is that long-term changes in global climate are controlled by geologic forces, and in particular, changes in the configuration of continents as a result of plate tectonics.

This figure was originally prepared by Dragons flight from publicly available data and is part of the Global Warming Art project.