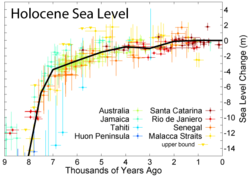 Expansion of the most recent 9 kyr

This figure shows sea level rise the end of the last glacial episode based on data from Fleming et al. 1998, Fleming 2000, and Milne et al. 2005. These papers collected data from various reports and adjusted them for subsequent vertical geologic motions, primarily those associated with post-glacial continental and hydroisostatic rebound. The first refers to deformations caused by the weight of continental ice sheets pressing down on the land the latter refers to uplift in coastal areas resulting from the increased weight of water associated with rising sea levels. Because of the latter effect and associated uplift, many islands, especially in the Pacific, experienced higher local sea levels in the mid-Holocene than they do today. Uncertainty about the magnitude of these corrections is the dominant uncertainty in many measurements of sea level change.

The black curve is based on minimizing the sum of squares error weighted distance between this curve and the plotted data. It was constructed by adjusting a number of specified tie points, typically placed every 1 kyr but at times adjusted for sparse or rapidly varying data. A small number of extreme outliers were dropped. Some authors propose the existence of significant short-term fluctuations in sea level such that the sea level curve might oscillate up and down about this ~1 kyr mean state. Others dispute this and argue that sea level change has largely been a smooth and gradual process. However, at least one episode of rapid deglaciation, known as meltwater pulse 1A, is agreed upon, and is indicated on the plot. A variety of other accelerated periods of deglaciation have been proposed (i.e. meltwater pulse 1B, 1C, 1D, 2, 3...), but it is unclear whether these actually occurred or merely reflect misinterpretation of difficult measurements. No other events are evident in the data presented above.

The lowest point of sea level during the last glaciation is not well constrained by observations (shown here as a dashed curve), but is generally argued to be approximately 130 ± 10 m below present sea level and to have occurred at approximately 22 ± 3 thousand years ago. The time of lowest sea level is more or less equivalent to the Last Glacial Maximum. Prior to this time, ice sheets were still increasing in size, so sea level had been decreasing almost continuously for approximately 100,000 years.

This figure was prepared by Robert A. Rohde from published data, and is incorporated into the Global Warming Art project.